I have a thing for marshmallow treats/rice Krispie treats/whatever you want to call because I don’t care/I just want to shove their gooey buttery deliciousness in my mouth. Perhaps I’m madly in love with them because I can chow down on cereal without having to drink milk or maybe it’s the melty marshmallow (melty is totally a word) or the butter. You’re probably thinking, duh Lindsey it’s the butter. You throw a pound of butter into everything you make. Well yes, I do but really it’s because rice Krispie treats/marshmallow treats/whatever…remind me of one of my favorite places ever, Walt Disney World. Whenever I see a rice Krispie treat, I can’t help but think of the massive Mickey Mouse shaped rice Krispie treats from Walt Disney World that are bigger than my head. It’s butter love + gooey marshmallow love times a billion and who doesn’t love butter times a billion? 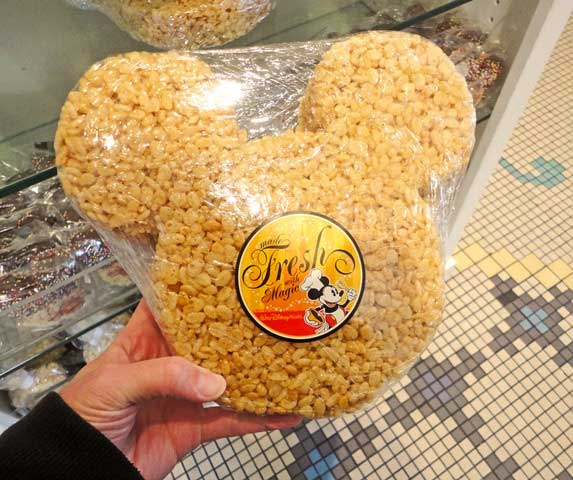 Question For You! Is there a food that reminds you of a particular place (such as Walt Disney World!) or of a certain person or moment in your life?

Get everything together so you aren’t running around like a crazy nut around the kitchen. Measure out 1/2 cup semi-sweet chocolate chips and 1/2 cup butterscotch chips. Now go put them in the freezer until they’re really cold. Why? So they don’t all melt when you add them to the warm marshmallow/rice Krispie mixture.

Measure out 5 cups of Rice Krispies and 4 cups mini marshmallows. Set aside and try not to eat the marshmallows…. 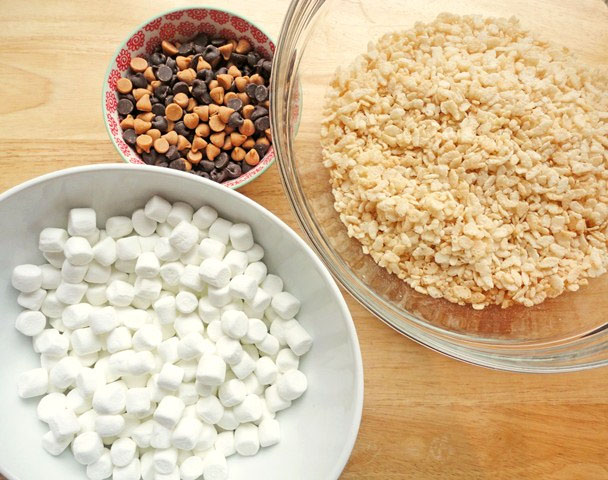 Melt 5 Tablespoons unsalted butter in a large saucepan over medium-low heat. Once the butter is melted, throw in the mini marshmallows and stir them up until they’re all melty. It’s so a word. 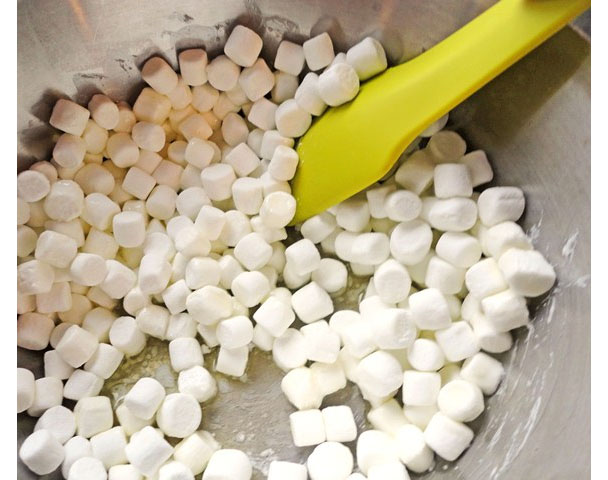 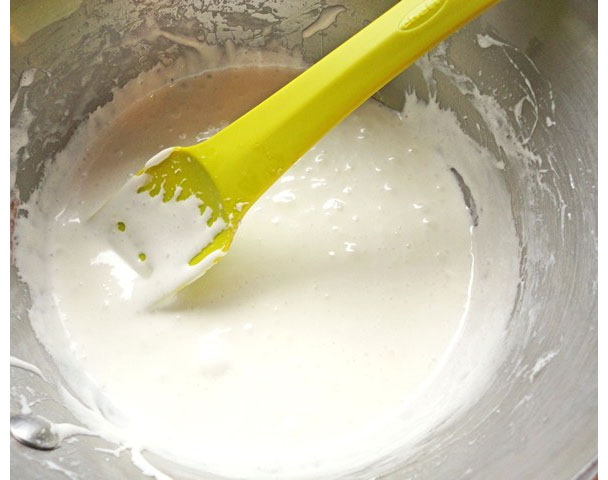 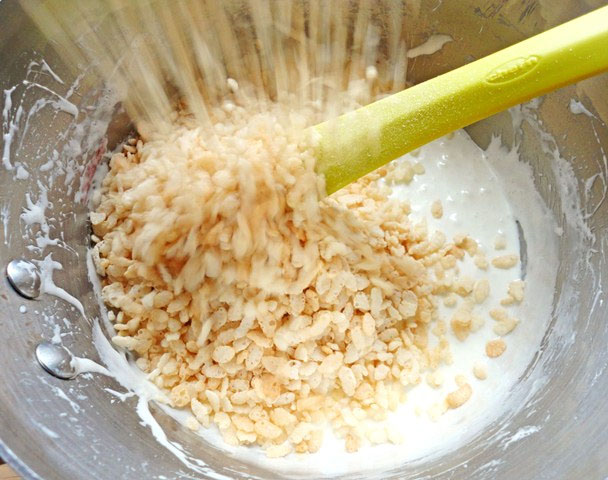 Stir it up really well and make sure all of the cereal is coated in the oh so tasty buttery marshmallow mixture. 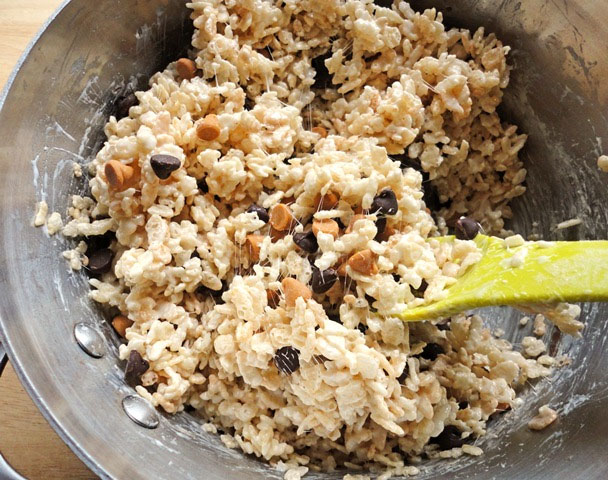 Press the mixture into a lightly greased 8 by 8-inch pan. 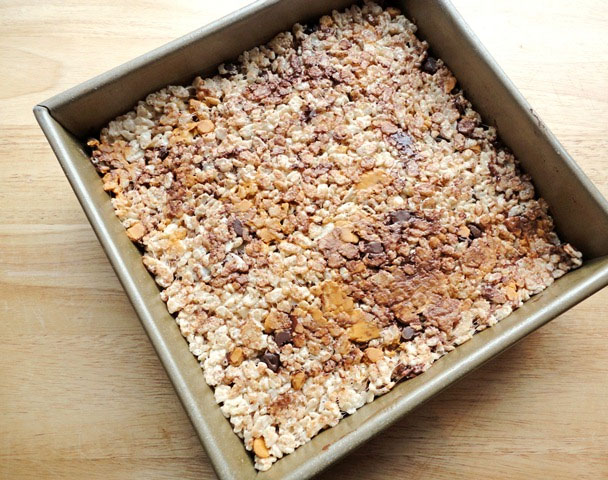 And because I have (seriously good) issues….we’re going to put more chocolate and more butterscotch on the marshmallow treats. In a microwavable bowl, melt 1 cup semi-sweet chocolate chips and 1 cup butterscotch chips.

Pour it over the marshmallow treats. Oh yes! I would so put my mouth under that but I’ve burned myself enough.

Spread it out over the marshmallow treats. Let the topping harden and then cut into giant squares or seriously cool Mickey Mouse heads. Enjoy!

Put the 1/2 cup semi-sweet chocolate chips and 1/2 cup butterscotch chips in the freezer for a while until they’re cold. This way they won’t melt when added to the warm Rice Krispie mixture

In a large saucepan, melt the unsalted butter over medium-low heat. Once the butter is melted, add the mini marshmallows. Stir the marshmallows until they’re melted.

Add in the cold semi-sweet chocolate chips and cold butterscotch chips and stir them in.

Press the Rice Krispie mixture into a lightly greased 8 by 8-inch pan.

Pour the mixture over the marshmallow treats and spread it out.

Let the topping harden and then cut into giant squares. 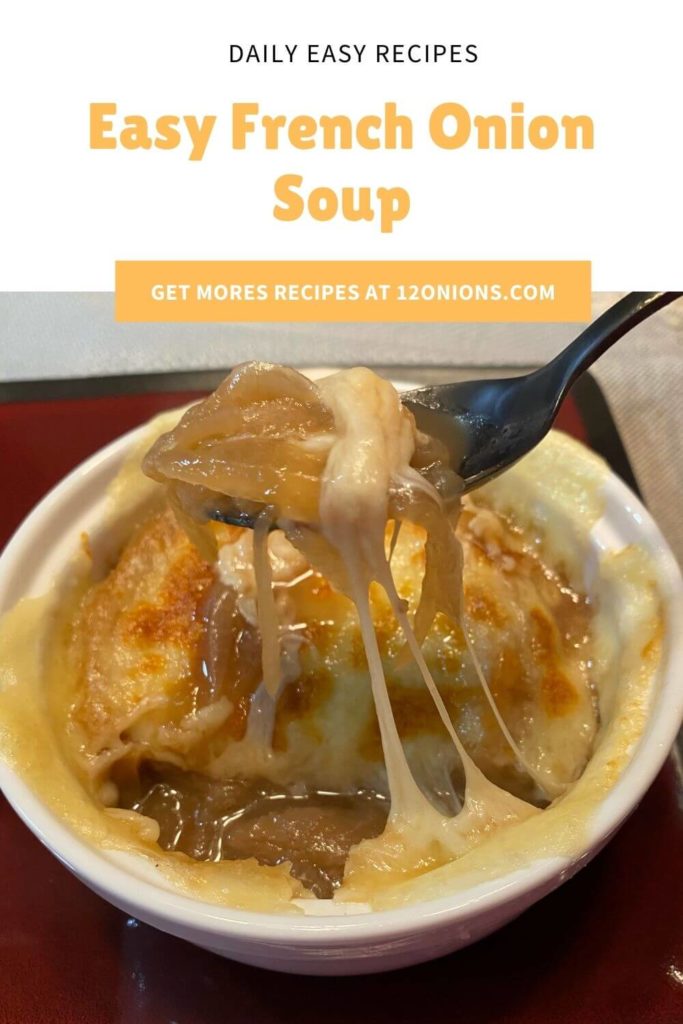 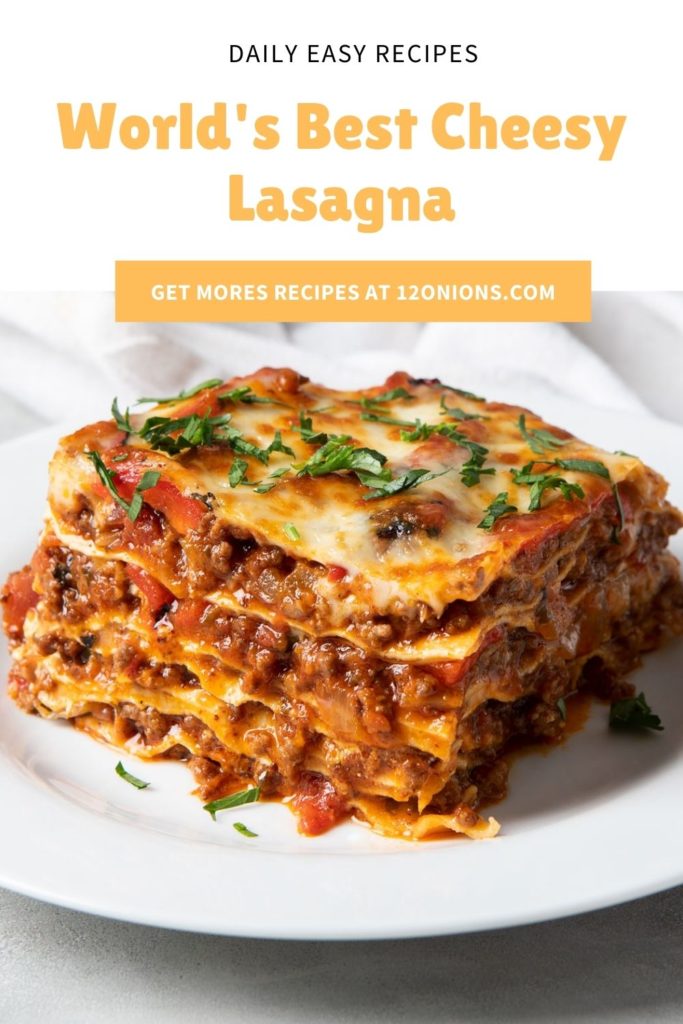